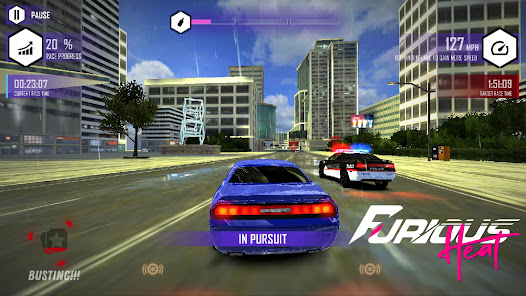 Furious Heat is the next installment to the Furious: Payback, Story continues into the Furious Heat.
NOTE: This is not an Official FF Game, Furious Racing Series is a separate franchise launched by Hammerhead Studio, all Content in the game is not related to any game and was created by Kohaku Studio Japan.

Story:
The story follows the player participating in the Heat Showdown, an organized racing event held on the streets and surrounding countryside of Night City.
As they participate in more events at the Heat Showdown, they attract the attention of Lieutenant Wolf; the leader of a task force within the NCPD. The player eventually becomes a target for the task force, goes underground, and started working for the Crew as an underground agent.
Roma and Mando gave experience and guide through it to reach up to the Verone and Yakuza.

Campaign:
Campaign missions are story-centered events that occur as the player proceeds through the Heat Showdown and as they reach higher Rep Levels racing at night.

Gameplay:
Many Cars to drive in Fast & more Furious Heat Racing with different drive missions like Street Race, Time Trial, Cop Smash, Car Deliver, and most awaited Drag Races, Now for the fun part, where you turn it up a notch and take your stock ride into something spectacular. Visually customize your ride to get it looking just how you want, and your garage has never looked better. But deep down we know it’s what’s under the hood that counts; win and buy the hottest aftermarket parts and craft the perfect driving machine.
Double down on risk to run up your rewards. Nail speed and style moments to bank extra rep, and string together Heaters for massive multipliers. Push your limits to bank your winnings, or will you go bust? Up the ante with challenges that raise the stakes in races. Win the race and the challenge to multiply your bank. Get on the Tokyo Racing and use the nitro to drive as fast and as furious as you can in 15 supercars! Enjoy the advanced physics engine with incredible physics behavior and graphics.

Stay with us for Updates and Suggestions, Like our page for a quick response!
https://www.facebook.com/HammerheadGames92/