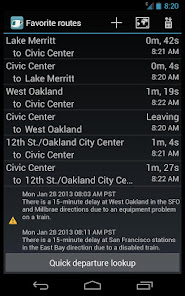 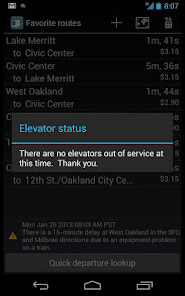 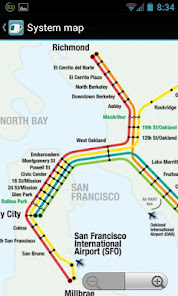 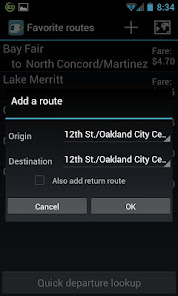 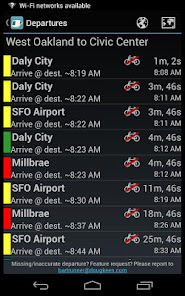 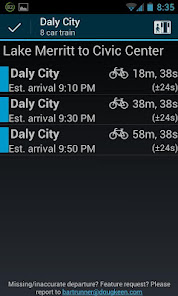 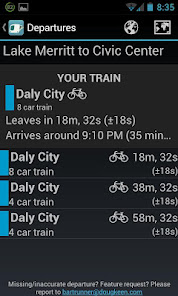 **FREE, OPEN SOURCE, NO ADS**
This app is centered around the basic question “[expletive of choice], am I gonna miss the BART?”. Enter your most traveled routes and receive a real-time listing of upcoming departures in one click. Unlike most apps, the estimated time until departure actually counts down second-by-second, so you’ll know just how fast you need to run to the station! Note that estimated departure times are, in fact, estimates, though the general accuracy of an estimate is shown beneath the countdown. After a minute or so, the accuracy of the estimates should automatically increase.

Unique features of this app:
* Streamlined for experienced BART commuters
* Real-time departure info refreshes automatically, and the accuracy of the departure estimates increases over time
* Estimated arrival times
* Pick which train you want to board, and information about that departure will be available in your notification tray.
* Set a departure alarm to go off a few minutes before your train leaves (you pick how much advance warning you want)
* Routes are entered with both the origin station and the destination station, so the real-time departures listing only lists trains that will actually get you to your destination
* Phone will not sleep while viewing departure times (the screen will only dim), so you only need a quick glance at the phone to see how long you have left to catch the train
* Zoomable offline system map
* Fares and next departure time are shown in the saved route listing
* No ads and open source; Built purely for the love of programming, and because I didn’t like any of the other BART apps out there

If you have any bugs to report or suggestions for the app, please email them to [email protected] I can’t guarantee that I’ll have a chance to respond to every email, but I’ll do my best!

NOTE TO GALAXY S USERS:
I’m aware of an issue with that specific phone model that causes the app to crash consistently. I’m working hard on a fix, so keep your eyes out for an update! Meanwhile, please contact me at [email protected] if you can volunteer some time to help me track down the problem.